In which I explore the nobility of following a dream with the aid of a poem by Edgar Allan Poe.

An English teacher told me once I would never be a writer. At the time I didn’t listen because I thought I was going to be an actress, but those words stuck with me. When I finally realized that I had stories inside me (I had just been acting them out instead of writing them), I remembered what that teacher had said, and ignored her. I had a dream to pursue.

All artists have much in common. We pursue dreams. We aren’t always successful, depending on your definition of success (yes, that’s one of those words where the definition can mean different things to different people despite having an entry in the dictionary). Many of us don’t make money, many of us have day jobs because we can’t support ourselves with our art, many of us have other responsibilities. So we worry about being real artists, but if you valiantly make the effort, don’t worry. The pursuit of the dream is as noble as the dream itself.

Think about it. If you dream about being a writer or whatever, and you do nothing to achieve that dream, then it’s a nice fantasy, but little else. But if you are actively writing (or whatever), and learning, and trying, and submitting, then you are as valid a writer as Ms. Bestseller whose 400th book comes out next week (there is that propensity for hyperbole again). The pursuit of the dream is as noble as the dream itself.

I’ve put Edgar Allan Poe’s poem “Eldorado” here, because it embodies this ideal. A knight spends his whole life searching for Eldorado, but in vain. It’s a poem about perseverance. Yes, he fails, but look at that last stanza. As the knight is dying, he meets a ghost, and the ghost tells him to keep on. “Ride, boldly ride.” That doesn’t sound to me as if the ghost is trying to dissuade him from his quest.

Tears of the Rose by Jeffe Kennedy

In which I ask for help in either, a) getting inspiration to continue to work, or , b) getting permission to take a break.

It’s that time of year when the desire to do actual work fails me completely. I have presents to buy and wrap, special cookies to bake, and possibly travel plans to make. I get visitors or at least a chance to see people I haven’t in a long time. But I also have THE BOOK calling to me from in my brain. And with it’s call comes a healthy dose of guilt. I should be working, but instead I’m wrapping (hey, at least I’m not rapping. That would be frightening.) I should be plotting, but instead I’m partying.

Tears of the Rose by Jeffe Kennedy

In which I talk about the struggle between getting it right and just getting it done. The story is there; it’s the writing of it that’s hard (Well, that’s a no brainer).

Not only am I the world’s worst typist (You have learned about my penchant for hyperbole, right?), I tend to be anal about grammar, punctuation, etc. So turning off that internal editor just to get words on the page is one of the most exhausting elements of novel process that I go through. I want to correct as the symbols, letters and words, hit the page. It’s excruciating to let the mistakes lie and move onto the next thing for me. But without that haranguing voice echoing through my brain, I can write with more feeling, with more freedom. That bitch’s voice telling us the writing is no good, error-laden, and pointless, freezes the product. Only when you ignore the urge to go back and edit every sentence will you get past that first sentence, that first paragraph, that first chapter.

Not all of us work in the same manner. Some of us are final draft writers. Every word we put on the paper is perfect. But we’ve already done a lot of the prep work ahead of time. We’ve outlined, plotted, planned, and meditated to make that draft possible. Some of us are first draft writers. We don’t care what we put on the paper; we can always go back and revise later.  I fall somewhere in between and drift from one extreme to the other and visit the entire scale along the way. In any case, that internal editor can keep us from producing anything. If the bitch is telling us that we’re not good enough, we can freeze up and never produce a sentence. And that’s what we’re aiming for: producing sentence after sentence until we have a book.

I wrestle with my internal editor daily. Only after I lock her in a cage can I get to work and produce my stories. She struggles to pick the lock every time, but if I just get lost in the story, I can keep her there. I’m happy to let her out when it’s revision time. Then I can use her input, but until then, she needs to disappear. I still can’t let myself just write anything on the page–I stop to find the right term, the proper historical reference, etc.–but I’m getting better.  When I hand write, I can just circle a word I don’t like, put a check mark over it and leave it. I’m not so good when I type directly onto the computer.

And there’s always that little voice that tells me I’m not good enough. If I could learn how to shut her up, I’d be a much happier writer. I’ve heard she never goes away. The bitch.

In which I take issue with this culture of fearing and mocking intelligence, and the T-shirt that makes it sound as if it’s all right to do so.

I know you’ve seen it–on either the bumper sticker or the T-shirt or the meme.  The sentiment that reads, “Yet another day has passed and I didn’t use Algebra.” Or the one that says, “I’m an English major; you do the math.” I understand the humor behind it; it’s punny, it’s sarcastic, it’s ironic. Heck, I’ve even used some version of it myself.  I regret that. I don’t find it funny any longer. The more I think about it, the more disturbed I get. No, it’s not a major important issue in our society, but it troubles me nonetheless. Here’s why.

First the goal of this sentiment is to make the displayer feel superior to all those teachers and students who love math and use it; and it somehow tries to make their accomplishments unimportant. As an author you’d think I never use math, but you’d be wrong. Just the other day someone asked me to edit an essay. I moved sentences around to form a logical argument and wrote in my comments, “See, you still use your Geometry for writing. Remember proofs?” Geometry proofs teach logical thinking. It doesn’t require numbers.  And looking at royalty statements, taxes, business expenses–all a part of writing–does require some number acuity.

Here’s one for Algebra that does use numbers: if you go the grocery store and they offer 5 for $3.00, but you only want to buy one. Ta da: Algebra. So what? you say. You still don’t really use it. Well, do you really use history, art, dance, PE, wood shop, or science every day? And having read many, many essays, emails, tweets, and manuscripts, I would say some of you don’t even use English every day. Besides, you probably do use Algebra for simple equations more often than you think, only it’s so ingrained in your head that you don’t even recognize you’re using them (think about calculating expenses, or date entry, or comparing the price of cell phones.) 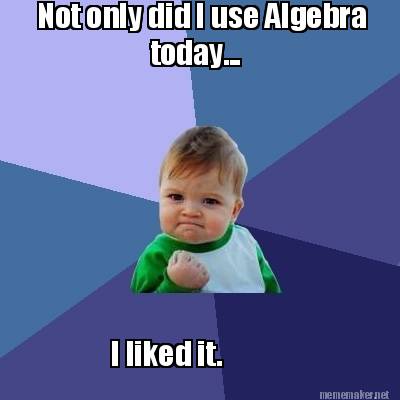 And there are many many people who do “use” Algebra every day. And even higher levels of math. Robot Guy is one of them. He told me to consider formulae and equations as a language. I use words to create; he uses math. Engineers are highly creative people. Their language is just different.

Math is about problem solving. The skills you learn, the way you look for solutions is math. It’s something that your brain was trained to do in math class. Besides, why is it bad to have knowledge that you don’t necessarily use everyday? I like to learn things just for the sake of knowing them. You never know when you may appear on Jeopardy! Or just play Trivial Pursuit with the family.

I don’t like the trend I’ve seen lately of intelligence shaming. Suddenly being smart is not something people value. TV does it. Look at the Big Bang Theory, a show I like and enjoy, but when you think about it, it makes fun of those members of society we label smart. No, I don’t believe going to school necessarily equals being smart, but this fear of knowledge that pervades our culture right now is a trend I’d like to see stop.

Yeah, I’m taking this too seriously. You don’t have to tell me.